Lucille stood in her room, surrounded by a pile of discarded uniform options, her frustration welling into tears.

“I have to wear a skirt,” she said, kicking a pair of uniform shorts across the wood floor.

“But you love shorts,” I said, trying to hand her a comfy looking pair. This was only the second week of school, early September in North Carolina, where we are still broiling in summer heat.

“No,” she said batting my hand away.

By now, I was frustrated too. The minutes were ticking down toward eight o’clock, and she still had to eat breakfast, brush her teeth, and find her shoes. Generally, we aren’t a family known for punctuality. But we make an effort to get the kids to school on time. Anyway, I thought, good parents probably don’t let their kids get tardy marks during the second week of second grade.

“Lucille,” I countered, my voice rising in my own frustration. “We just bought you all these new shorts to wear to school.” And here they were all in the prescribed khaki and navy, piled up on the floor. Lucille attends a public school with a uniform policy, and buying enough pairs of uniform shorts to get through these last weeks of heat had been an end-of-summer-break priority.

“I need a skirt,” Lucille insisted, her enlarged chin jutting out, reminding me to be gentle.

So there it was. And here we were.

“Tell me about it,” I said, cupping her face in my hand, holding the bone that holds the tumor. 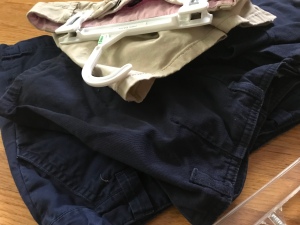 It hadn’t happened in second grade yet, but hearing people’s comments about her face was nothing new. Well-intentioned, ill-intentioned, or innocent, the comments came. A chiropractor asked if Lucille had Lion’s disease and suggested we watch the movie Mask.  Two smirking kids at the pool had pointed to Lucille’s face, called her “bigmouth,” and asked what she had swallowed. A tiny child in a public restroom simply asked “What happened to your face?” And on.  So, too, many, many people, who know and love us have said, “She’s still pretty.”

Still. Right. Here we are.

Lucille has a tumor, specifically a central giant cell reparative granuloma. It is lodged in the middle of her lower jaw bone. It is rare. It is aggressive. It is benign. It is not cancer, but it behaves like a cancer in many ways.

What does it look like? Lucille’s surgeon and her oncologist measure in centimeters and speak of facial disfigurement. I think the tumor looks like a ripe apple, wrapped in skin, right at the place where, a year ago, Lucille had a normal chin.

So here Lucille and I were, facing each other in her room on a busy fall morning. Her tumor stood between us and the rest of the day. If she didn’t get dressed now, she’d be late for school, and I’d be late for work. She turned her face to look out the window. In profile, and I could see so clearly how she looked to the rest of the world. Her pretty, disfigured face. Her elongated apple-chin. She looked like a caricature of herself.

We all have to deal with a lack of acceptance sometimes. We all face naysayers, about the way we look, the choices we make, the clothing we wear. And the list goes on. We face the naysayers, and we cannot let their words have power over us.  I had hoped my daughter would not have to learn this lesson at seven. And I had simply not imagined she would have to learn it while battling a disfiguring disease.  But what I needed to help my daughter understand this morning was not so different from what other parents help their children understand in the face of teasing and bullying.

I held my daughter and let her cry in the safety of my arms. When the tears passed, I explained that she is beautiful and that there will always be people who don’t look like everyone else.

“Lucille, not looking like everyone else will always be okay,” I said. “Sometimes, not looking like everyone else is even a good thing.” I also told her that there are times when we all have to face someone who says something mean. I told her that living with this tumor in her jaw was going to help her learn how to ignore bullies and meanies and be a good friend to other people who look different. I told her she was strong and that I had her back.

Then I helped her pick out a pretty uniform skirt and a pretty purple necklace and a pretty headband. She went to school, late but present, and willing to face the day.